Eastern Bloc Records is a quirky chill out kind of place in my favourite part of Manchester, the Northern Quarter.   They offer vegan breakfast for £8.00 proudly displayed on the board outside and I have been meaning to try it for ages. 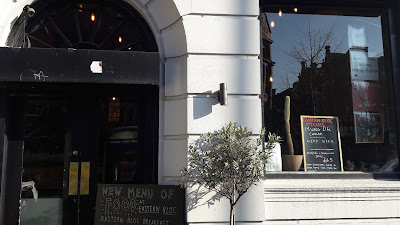 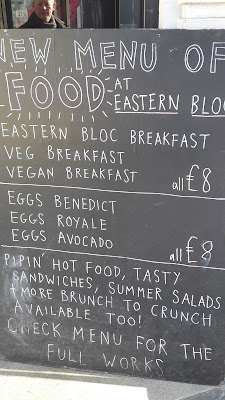 I love the interior, perfect for a lazy morning breakfast, in a quiet corner, after too much alcohol the evening before. 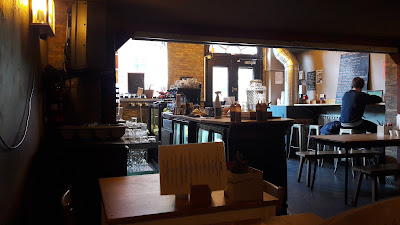 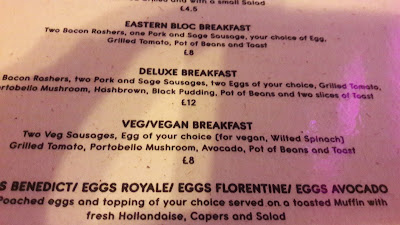 I chose vegan breakfast, with extra avocado instead of beans, but forgot to swap the sausages, however I knew Steven would eat them.   A large decaf black Americano was a perfect pick me up and if you like milk they offer soya and almond milk, at no extra charge. 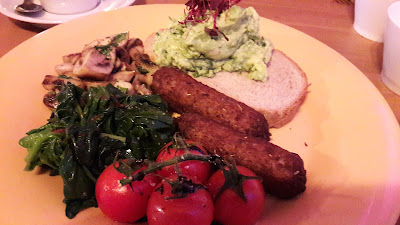 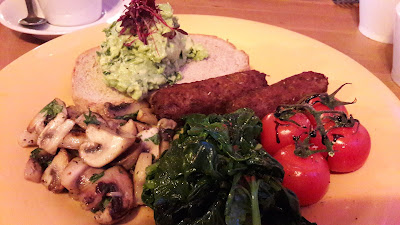 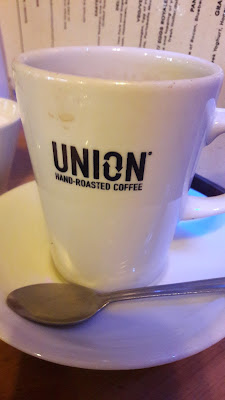 I loved the breakfast even without sausages, everything was cooked perfectly and the seasoning was spot on, chef knows how to cook for sure, the toast was excellent too.

I notice there were two vegan sandwiches on offer and a great selection of vegan cakes in the cabinet, so guess where I will be heading for coffee and cake, next time I am in Manchester.  Highly recommended. 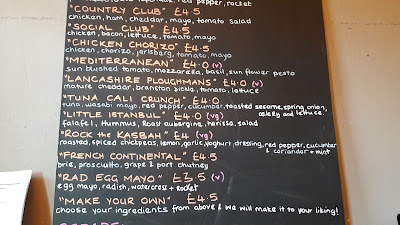 Northcote is a luxury hotel and restaurant in the village of Langho, not far from Blackburn and has held a Michelin Star for over two decades.

I have dined at Northcote a number of times over the last twenty years, as a guest, with friends and family and my experiences varied from okay, to disappointing, to severely lacking.   In those days I was not diagnosed with allergies, so I was interested to see how they would cope with a vegan with allergies to most pulses and seeds.

Our friend who invited us to go on this occasion, had been impressed with their handling of his dietary requirement previously and was keen for us to go,  so we went for lunch.   I suppose our table could be considered challenging, our friend is lactose intolerant, Steven is gluten free and then there is me.   We gave plenty of notice, I was specific about my allergies and to be honest dietary requirements are normal these days, we dine out all the time and it has never been a problem.

I enquired as to vegan wines on the extensive list and was told the four wines below:

My past experience when researching wines, prior to visiting other restaurants, is that a big percentage of wines are vegan, usually more than half.   I had already spotted a favourite of mine, the fabulous Goberlsburg Gruner Veltliner Kamptal 2015, a truly vegan wine, as the wine makers themselves told me so, so no need to peruse the wine list any further. 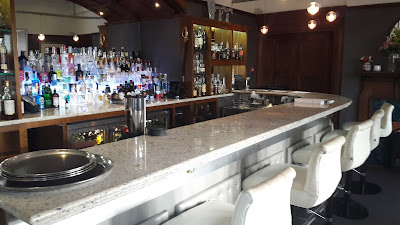 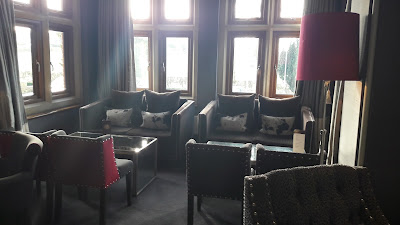 We arrived on a lovely sunny day and were shown through to the bar and a table in the window, whilst we perused the menus. 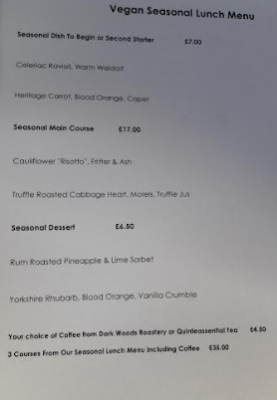 I chose Aperol and soda to accompany canapes brought to the table, whose description I missed, but was some kind of crackers and houmous, not particularly creative.   I kicked myself as I forgot to say no plastic straws in my drink, with all the news about reducing plastic usage, I am surprised Northcote do not use paper straws, I hope this is something they address. 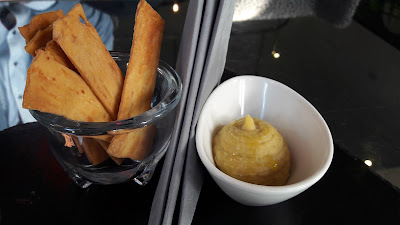 A lady reappeared and whisked the canapes away, as the crackers contained Lancashire cheese, so unsuitable for myself and our friend and probably not gluten free either, good job we had not already tucked in.   When more canapes arrived, beetroot meringues and crisps I immediately queried the meringues and was reassured they were made with aquafaba, they were nice, though I was underwhelmed by the canapes and I can eat crisps anytime. 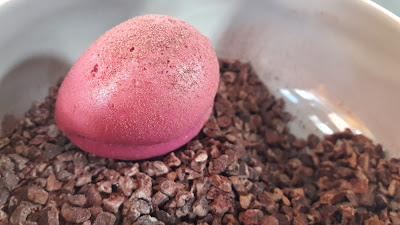 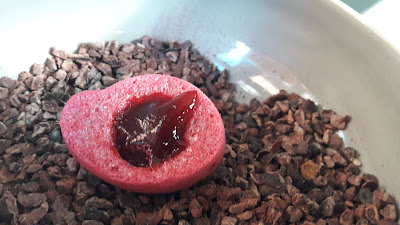 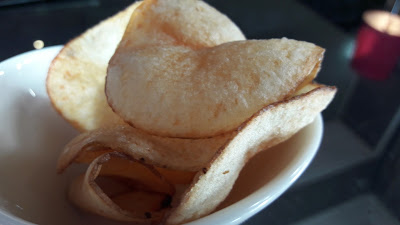 We were shown through to the dining room, which has had a full refurbishment, since our last visit and is a big improvement, more modern and relaxing.   There were three kinds of bread for the table, cheese, seeded and sourdough, with olive oil and balsamic for me instead of butter and gluten free bread for Steven, though obviously the cheese was not suitable for me or my friend.   I sadly only had the choice of sourdough, as the seeded was unsuitable, with lots of seeds I cannot eat on top, would not have taken much to keep a couple of plain rolls aside for me. 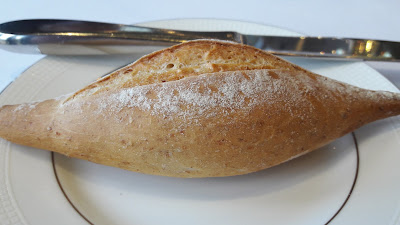 The breads were all on the same plate, served with the same cutlery and if you were highly sensitive, the cross contamination issue could be a problem.   I was not impressed that the waiter serving the bread, lent across me to put the bread on my side plate, instead of going behind to my left.

I chose the heritage carrot and caper starter, beautifully served with a fine blood orange gel, caper crisp and gel and carrot tartare, but the intense flavours I expected, just did not materialise. 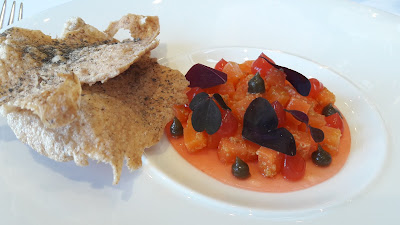 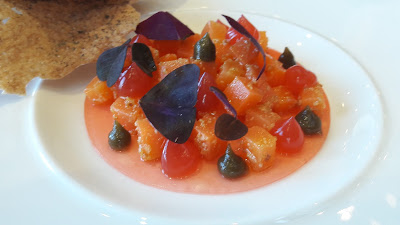 It was a tiny portion, so I asked for more bread and a different waiter once more lent across me to serve, I know it may seem pedantic, but in a high end establishment, I was surprised they did so. 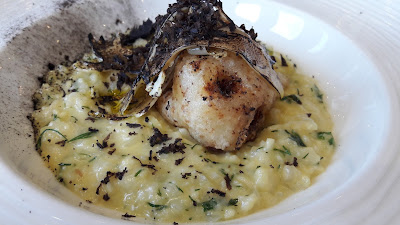 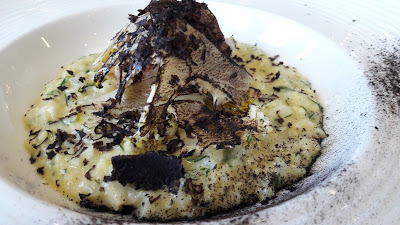 Finally to dessert of roast pineapple, lime sorbet, lime shard and pineapple crisp, the sorbet was the most intense flavour of the whole meal.   I love a good pudding but there was no wow factor, it was a dish I would expect to be served twenty years ago, in 2018 with new cooking techniques and exciting ingredients, it was a safe dish. 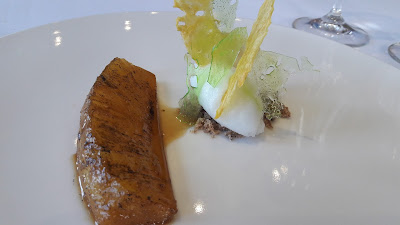 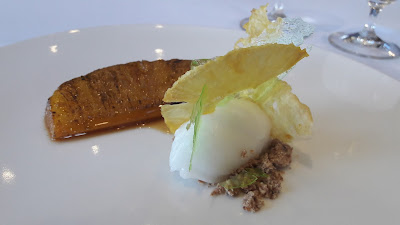 When the table was being cleared, the waiter did exactly the same as when serving the bread, leaning across me to take the side plate, then the bowl of oil and balsamic.

We had coffee and tea in the lounge, where I was offered a petit four, a torched piece of banana with some nut brittle on top, not inspiring, but at least I got one. 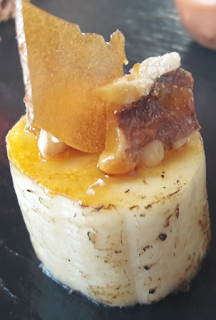 My overall impression of Northcote is as it was years ago, it did not meet my expectations, service was not perfect, the minute portions of food did not blow me away and attention as regards allergies and intolerances was lacking I thought.   If we had been on our own, I would have brought some of these niggles to their attention, however we did not want to upset our friend, so decided not to.

Would I make a return visit, I am not sure, I may give them the benefit of the doubt, but with so many other places on my to visit list, it will be awhile.

Lorama Foods Limited was set up by Lorayne, Rachel and Martin, who all previously worked together in the food manufacturing industry.  Their vision was to open a bakery and after much discussion, they took the bull by the horns and opened in the coastal village of Bosham in West Sussex.

Lorama Foods bake small batches of products, without the use of large machinery, as their ethos is people can make better quality products.   They use the finest ingredients, that have been ethically and responsibly sourced and aim to use British and local suppliers whenever possible.

I was asked if I would like to try their products, although I was unable to sample their cakes, which include soya milk, but their new range of vegan power balls were soya free, so Rachel popped some in the post.

I had no idea what the flavours were, until I opened the box and found this little lot, with the bright pink and yellow of the raspberry and mango balls catching my eye immediately. 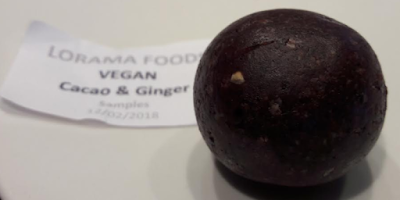 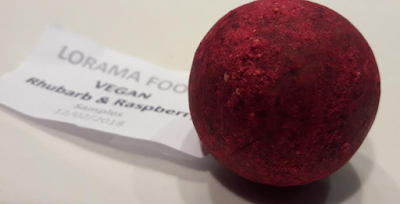 My first impression is how compact the balls are, so good to throw in your bag, as a snack on your travels.   Similar products are sometimes blended really smooth, but when you cut into these, they have a nice consistency, plenty of texture, yet are soft in the middle.   I loved the rhubarb and raspberry, which has an initial sour taste from the raspberry powder coating, sweetening up as you get to the middle.   Another favourite was the cacao and ginger, rich and lush with chocolate and a lovely warm heat from the ginger.   I really enjoyed the apricot and coconut, as I love both flavours, with the mango and macadamia my least favourite, only because I am not a mango lover, but sure it will tickle others taste buds.

These are great products available on Lorama's website soon and how I wish I could try their other products, I was drooling when I saw their chocolate cake on Twitter the other day.

Disclaimer:  I received free samples of these products and have not been paid for this review and all opinions are my own.
Posted by veganolive1 at 09:44 1 comment: