I created this as a dinner party dish, for my non vegan elderly neighbours, as a vegan take on the classic version and they absolutely loved it.   I use The Real Lancashire Black Pudding Company V Pud, which is the best vegan black pudding in my opinion, so much so my neighbour asked me to get her six.

Serves 2 as a main course or 4 as a starter

Cook the peas for 2 mins, drain and refresh with cold water to retain their vibrant green colour. 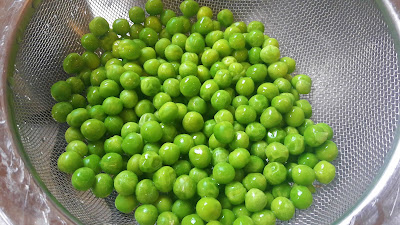 Blitz the peas, 1 tbsp oil and plenty salt and pepper with a stick blender, until you get a rough puree, then leave to one side whilst you cook the mushrooms and black pudding. 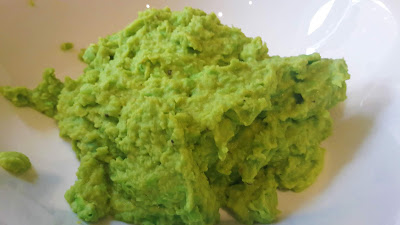 Cut the mushrooms and black pudding into thick slices.   Heat the remaining oil in a pan, add the mushrooms, salt and pepper and cook until browned, then put to one side of the pan. 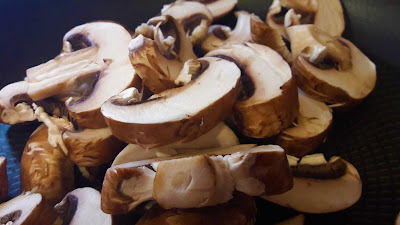 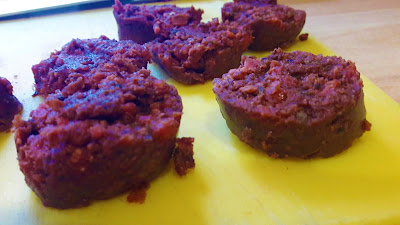 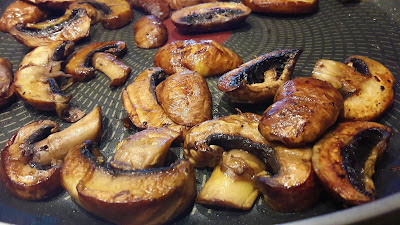 Add the black pudding to the pan, with more oil if needed and cook on each side for 5 mins till it is nice and brown. 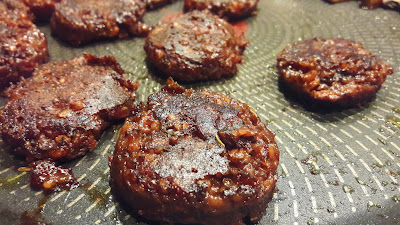 Reheat the pea puree either in the microwave or in a pan, then put three to four blobs on each plate, top with black pudding and arrange the mushrooms on top and around the plate.  Drizzle with a little more oil.   I also made this dish with shitake mushrooms, which I think makes for an even better dish, but its a cracker whichever mushrooms you use. 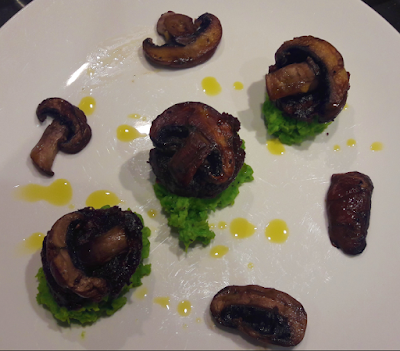 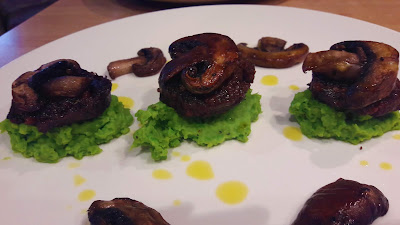 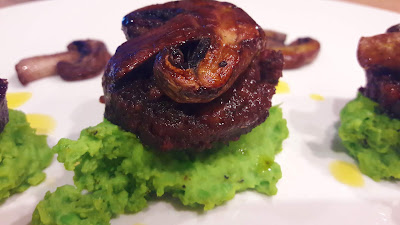 Eighth Day Co-Operative was established in the 1970's by a group of friends, looking to change the way goods were traded and the rest, as they say, is history.  The iconic and well loved Eighth Day is located near Manchester University and incorporates a cosy cafe downstairs and a shop upstairs. 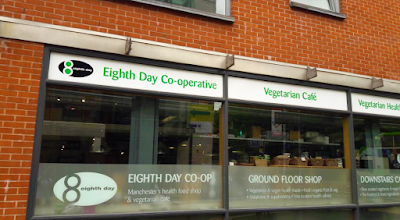 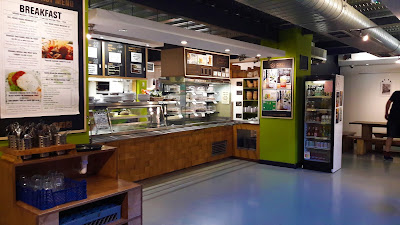 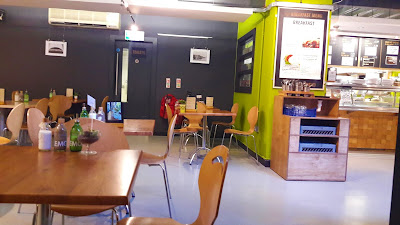 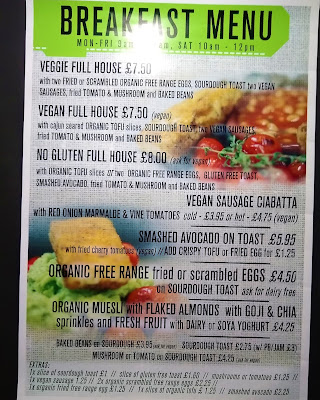 I called in for breakfast with Steven, as it was a ten minute walk from our hotel and we were starving, as dinner the night before at Real Junk Food Project, was a lightweight dinner with tiny portions.   I chose avocado on sourdough toast, with tomatoes and mushrooms and Steven a gluten free full vegan breakfast, two teas and almond milk. 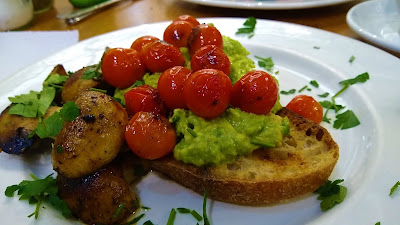 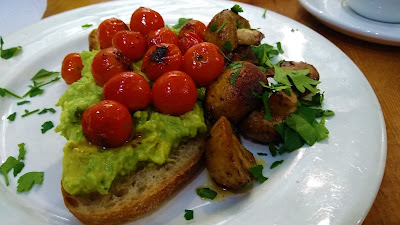 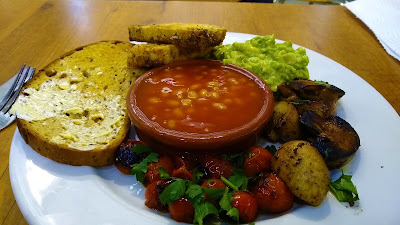 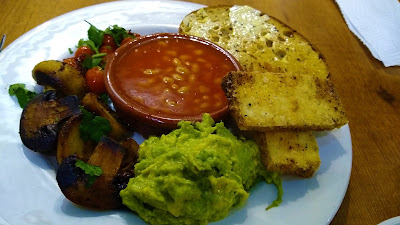 I think the photos say it all, just look at those full plates of vegan deliciousness, we could not fault either dish, well cooked, perfectly seasoned, scrumptious and devoured in a flash.

There was a huge display of vegan cakes in the chiller cabinet, all made by The Black Cat Bakery in Ardwick, its rare you see such a huge selection.   I was very tempted but I was full as a gun, a good excuse to make a return visit though, but last visit I tried the sticky ginger cake and very moreish it was too. 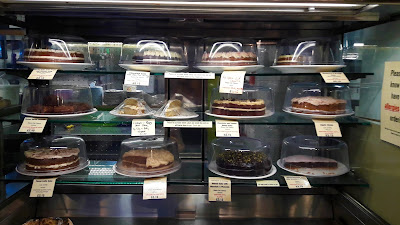 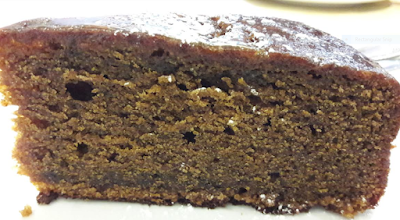 The shop is a fabulous place too, with loads of vegan goodies, from toiletries and supplements to dry goods like nuts, spices and herbs, seeds, grains, pulses, flours to chocolate and sweets, an excellent chilled section, with loads of cheeses, spreads, vegan meat and sausages.   I was over the moon to see my favourite V Pud vegan black pudding, so I stocked up, in fact I bought their entire stock, that's me sorted for a few weeks. 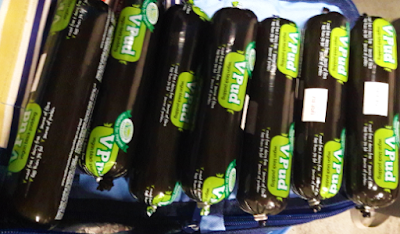 Eighth Day is highly recommended for any vegans visiting Manchester city centre, I will certainly be returning very soon.

If you read part one of My Vegan Dining Adventures, it was Heathcotes who introduced me to vegan Michelin dining, spurring me on to write to celebrity chefs, to see who would cater for me.   It was 2001 and first on my list was Gordon Ramsay, having seen him on television in Boiling Point and knowing his dislike of vegans, I was expecting either no response or a big two fingers.

I actually received a lovely letter from his father in law Chris Hutcheson, asking me to ring him, as Gordon was up for the challenge.   You could have knocked me over with a feather.

I rang Mr Hutcheson and made a reservation and looked forward to the date, with some trepidation.  Three Michelin Star Restaurant Gordon Ramsay, on Royal Hospital Road London was Gordon's only restaurant at the time, although he was just about to take over the kitchen and dining room at Claridge's.

On arrival I was treated like royalty, the Restaurant Manager shook my hand and said it was a pleasure to welcome their first vegan diner, as he showed us to the best table for two at the far end of the room, facing into the restaurant, with prime seats to watch evening service.

I had no mobile phone that took photos back then and taking a camera really was not an option, I would have felt too self conscious.   The food was truly stunning, sadly my memory is shot at and I cannot remember what I had, mind you it was seventeen years ago.  Ronan the wine sommelier came over and said when we finished our coffee Gordon would like to meet us, which is the last thing I was expecting.

We were shown into the kitchen, where the chefs were lined up at the pass and we had a chat with Head Chef Mark Askew, a Yorkshire lad from Rathmell, a really nice guy.   Suddenly the doors burst open and in strides Gordon, who walked to the end of the pass and faced us all.  The first words that came out of his mouth were 'Now then lads this is Mrs V that f*cking vegan I was telling you about'.  What a welcome but to be expected, after all one of his television programmes was called the F word, it was all in jest though, he really does like to take the mick.

We had a brief chat and he was interested in why I was vegan, not in a derogatory way, he just could not get his head round the fact, that I did not eat all the lovely produce, as he called it, he loved to cook with.   He then said 'I was going to give you a signed copy of my latest recipe book, but there is f*ck all in it you can eat'.   I cannot remember what I said, but being a mouthy Lancashire lass, who can give as good as I get, I cheekily fired back at him, so he took me back through the restaurant to his office and signed a copy of the book and gave it me. 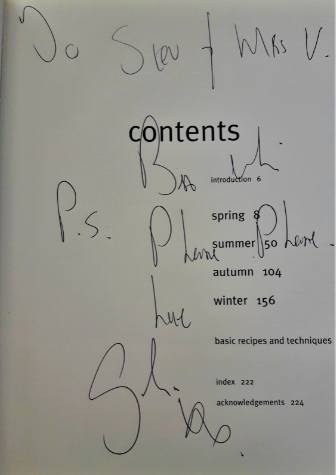 Gordon then sat with us in reception for a further chat and told us all about his plans for Claridge's with its chefs table in the kitchen and said we should visit.   His parting words were if I wanted to revisit, to give his father in law a ring.

I have no idea what the other diners thought, because Gordon never spoke with any of them, it was a bit embarrassing to be honest.   Do I think Gordon hates vegans as he portrays in the press and on social media, definitely not, its all bluster he just likes to wind people up and he is brilliant at it.

I never did make it to Claridge's under his leadership or back to Royal Hospital Road either, but Gordon was wrong, there were a couple of recipes in his book once veganised that I could eat and damn delicious they were too.

This story goes back over twenty five years and involves a Middle Eastern restaurant called The Sahara, owned by Seb from Egypt and his English wife Ann.  The Sahara was a great place and Seb was brilliant at catering for my vegan diet, adapting dishes to suit, so we became regular customers and visited with friends and family.

The Sahara was great for intimate dinners, family gatherings and for large groups they had a bedoiun tent set up to the rear of the restaurant and Seb would serve a tasting menu.  Outfits were provided to create an ambience for the evening, as you sat at low tables, on large cushions to eat your meal, with a small bell to ring, to let staff know you were ready for the next course.   They were fun nights, as the not so agile tried to sit cross legged on the floor, or sat back on their heels and got pins and needles or cramps and with a few drinks, you can imagine the scenario, especially with that bell.   I dined well off wonderful dishes including borek filo pastries filled with spinach and pine nuts, ful medames a dish of cooked fava beans, houmous, flat breads, vegetables tagines, couscous, baklava and strong coffee which gave you a caffeine high.

So what is the lamb stew mentioned in the title, well read on to find out.  I had gone to The Sahara with Steven, my brother and his wife, wearing a brand new, never been worn denim dress and after the evenings events, I wish I had worn something old.

Everything was going brilliantly until Ann brought out a big plate of lamb stew, with a large spoon and fork precariously balanced on top.   As she walked towards the table, the cutlery started to slip and in her efforts to try and not drop them on the floor, she tipped the entire plate of lamb stew all over my lap.  The stew was red hot so I jumped up, lifted my dress up so my legs didn't get burnt (good job I was wearing appropriate underwear so as not to frighten the customers and staff) and thought what the hell do I do next.   Ann was mortified as was I, so she took me straight into the kitchen to tip the stew into the bin and try and clean me up.   The stew was full of spices, tomatoes and oil, staining the dress, so Ann suggested she wash and dry it, as there was a washing machine and dryer for the linen.  She gave me a blue kaftan to wear, about four times too big and off I went to finish my dinner.   My brother was in hysterics at the irony of a vegan with lamb stew in her lap and if mobile phones and social media were around, there would have been loads of photos.

The dress was ruined, the stitching turned orange and there was a huge grease stain on the front, but I would not have worn it anyway, not having had lamb juices all over it, even though it had been washed, so Ann and Seb gave me the money to buy a new one.

Sadly The Sahara closed down, as Seb and Ann parted company, leaving me with so many memories of our Sahara nights, but that one topped them all.