The Mill is part of the Lancaster Brewery chain of pubs and is right in the centre of Ulverston and we went for a drink on the first day of our visit. 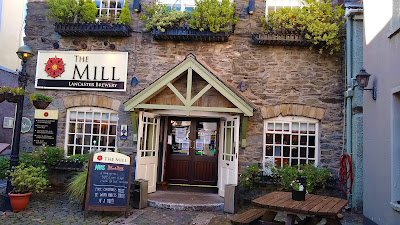 We looked at the menu outside and with no dishes marked vegan, asked our waitress and she pointed out suitable dishes, mentioning the soup was normally vegan, as was the sticky toffee pudding and vegan ice creams were available.

I asked her why they did not label them and she said initially they did, but sales were slow because people were put off, thinking they would be tasteless being a vegan dish.   It looks like we still have a long way to go on the vegan front, as I have been told this several times before at other venues.
We booked a table for the following night and on arrival were shown to a well spaced table upstairs in the restaurant. 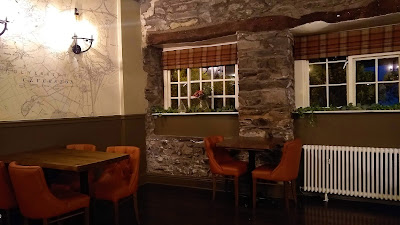 Whilst having a beer, I spotted one of my favourite wines on the wine list, Domaine de Vedilhan Viognier so ordered a bottle. 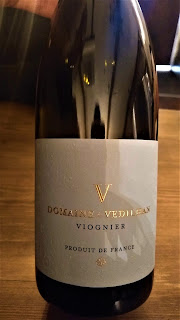 I ordered broccoli and potato soup of the day, although I was unable to have the bread as it contained soya, with the soy and sesame broccoli with tahini dressing for Steven to start. 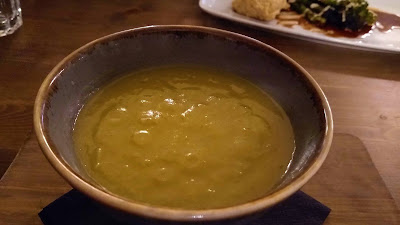 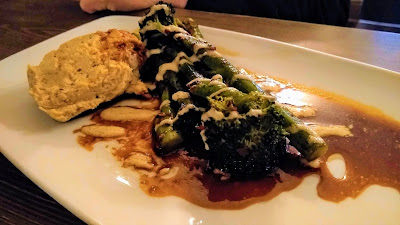 The starters were delicious, an ample portion of velvety thick tasty soup and Steven loved his starter and will be replicating it at home he enjoyed it so much, a simple idea which worked brilliantly.
Mains were spaghetti with slow roast tomato sauce for me and the butternut squash and sweet potato curry with pilaf rice for Steven, with a green salad to share. 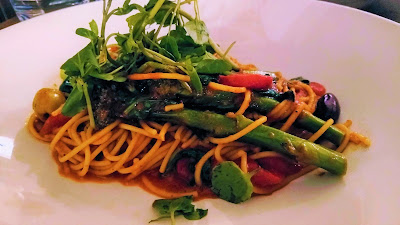 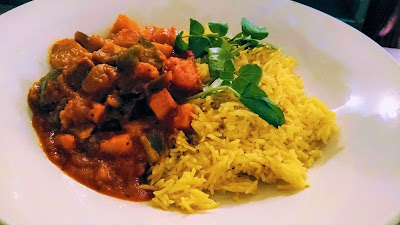 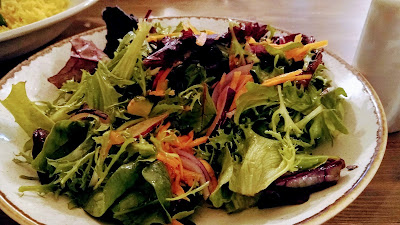 The mains were hearty portions of scrumptiousness, well cooked and seasoned and after a thirteen mile walk much welcomed sustenance and we left not a scrap.
We finished with coffee and the rest of the wine, as we were fit to burst, even though sticky toffee pudding sounded tempting.   We were impressed with The Mill and would definitely revisit when next in Ulverston.
Posted by veganolive1 at 12:52