Doner Haus is in the iconic Corn Exchange, not far from Victoria station and is a German inspired restaurant, which only opened three weeks ago.   I enquired about allergen information and was very impressed with the reply and attention to detail answering my questions, so booked a table for dinner. 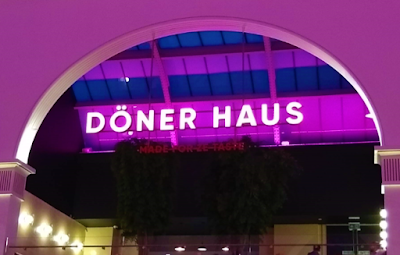 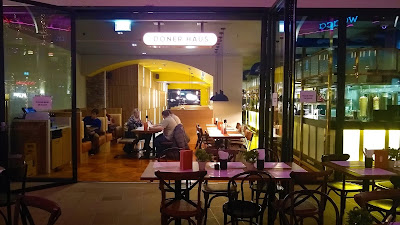 The restaurant is a casual relaxed environment, with dining areas on different levels, cosy booths to sit in or window seats to look out and people watch during the day. 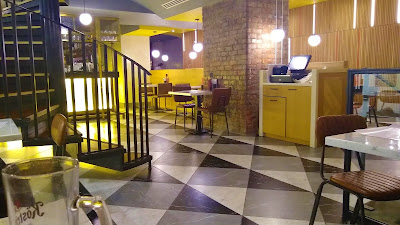 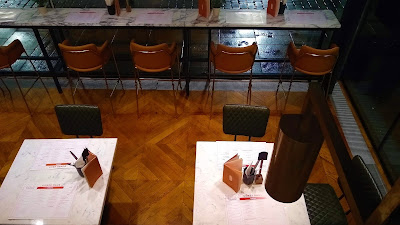 There are several vegan options on the menu, as well as various side dishes to choose from, all clearly labelled, although no vegan dessert.

I was told the dishes below could be tweaked to suit, swapping pida for fladenbrot bread and garlic sauce for chilli sauce.

I kicked off with a pint of Kostritzer Kellerbier, an unfiltered naturally cloudy beer, which was full flavoured and totally delicious. 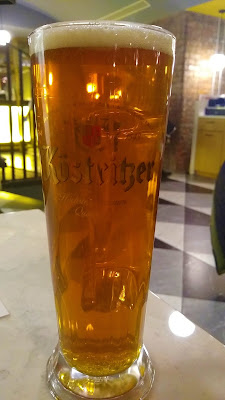 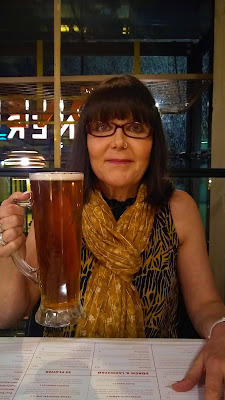 We started with falafel and houmous, which turned out to be a fabulous dish and perfect for sharing.   The falafel were fantastic as the chickpeas were not blitzed into a smooth paste, so had loads of texture and with a big dollop of delicious houmous and tabbouleh salad, was quickly demolished leaving a clean plate. 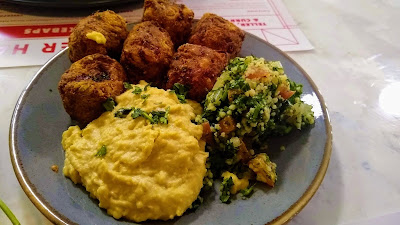 Main courses were vegan Schnitzel with fries and a pot of hot sauce for Steven and a veganwurst for me, swapping out the curry ketchup for chilli sauce. 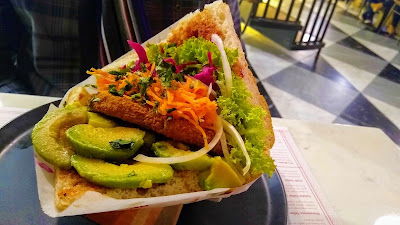 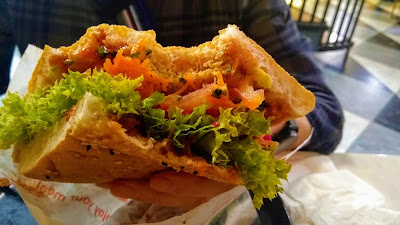 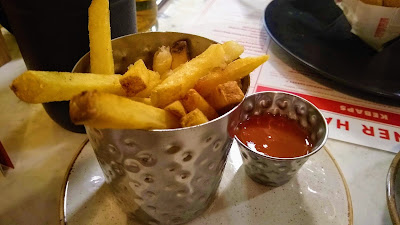 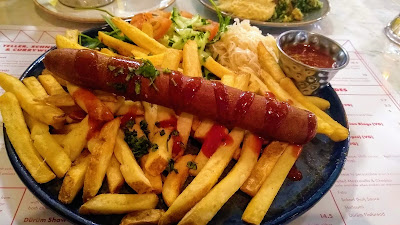 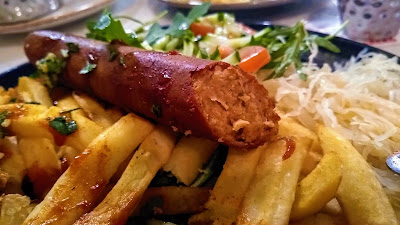 The two dishes were excellent, the Schnitzel was massive, with loads of fresh salad and the hot sauce was very spicy apparently, Steven loved it and demolished the lot.   The veganwurst itself made from wheat protein was amazing, with a full on smoky flavour and great texture, with fresh salad, a tasty slaw and loads of chips I loved it too.

I had a chat with owners Saj and Laura and I suggested they could perhaps label which drinks are vegan friendly, making it so much easier for vegans, instead of us having to do a Google or Barnivore search.   Saj said this was definitely something for them to look at, as well as offering a vegan menu with accompanying drinks, which is a great idea, perhaps a vegan dessert will be included.

I was a little apprehensive before our visit, as Doner Haus is not my usual kind of dining venue or food, but I was completely won over.   Highly recommended.

Disclaimer:  I was given the meal complimentary and have not been paid for this review and all opinions are my own.
Posted by veganolive1 at 08:30 No comments:

The Stanhill Pub is in Oswaldwistle, an unlikely place to find vegan options yet proves the growing popularity of veganism.   The Stanhill recently introduced a vegan menu, which is not some token gesture either, but well thought out with creative dishes. 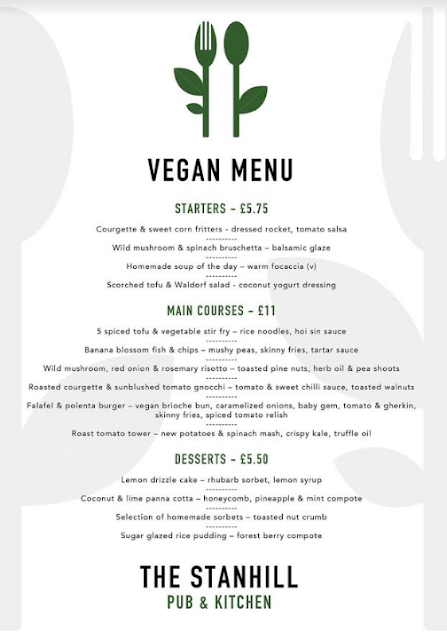 I had a chat with head chef Nathan via email prior to our visit about my allergies and was impressed with his responses and patience with my queries.

The Stanhill is a large pub with plenty parking, a beer garden and outside seating, with a welcoming atmosphere and although quiet when we arrived, by the time we left was packed. 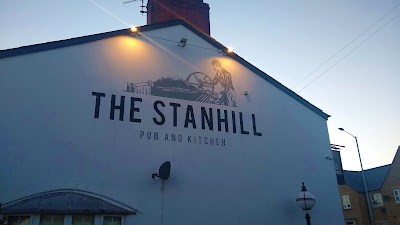 We were shown to a cosy table for two and had a quiet drink whilst perusing the menu and chose starters of mushroom and spinach bruschetta for me and leek and potato soup for Steven. 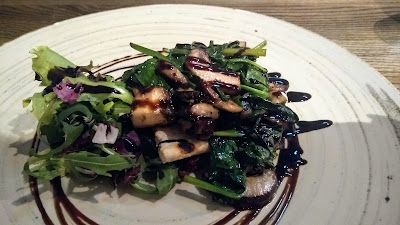 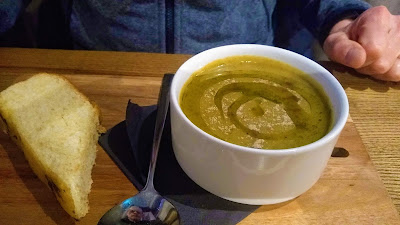 Our starters were excellent, the soup was thick and velvety, the mushrooms were perfectly cooked and the food was well seasoned, what a great start to the meal.

I knew which main course Steven would choose, as he loves tofu and although my intention was to have the vegan fish and chips, I ended up choosing the gnocchi. 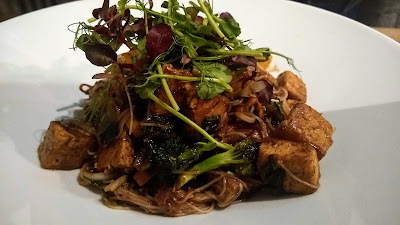 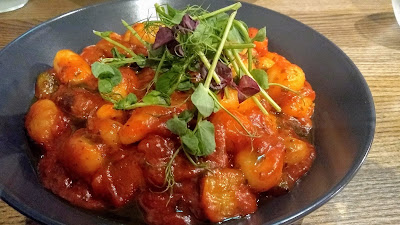 The main courses, like the starters were absolutely spot on, packed with great flavours and quickly demolished, although I left a little gnocchi as it was a huge portion.

My experience exceeded my expectations, so many menus sound promising and are a complete let down on eating, but not at The Stanhill.   I had a quick word with front of house manager Sam, who said the vegan menu was proving popular with not only vegans but non vegans too.   I think the fact they offer the vegan menu to all customers and is not hidden away as at so many places, is a great idea.   My only critiques are its a shame the wine list does not include vegan friendly wines, so I took a photo and will research before my next visit and they need to add the vegan menu to their website.

I will definitely be returning, sooner rather than later, as there are so many dishes I want to try, as does Steven.   Highly recommended.